The 6-yard magic of Kanchipuram

The silk weavers of Kanchipuram are highly skilled artisans, but is there a future for this art? 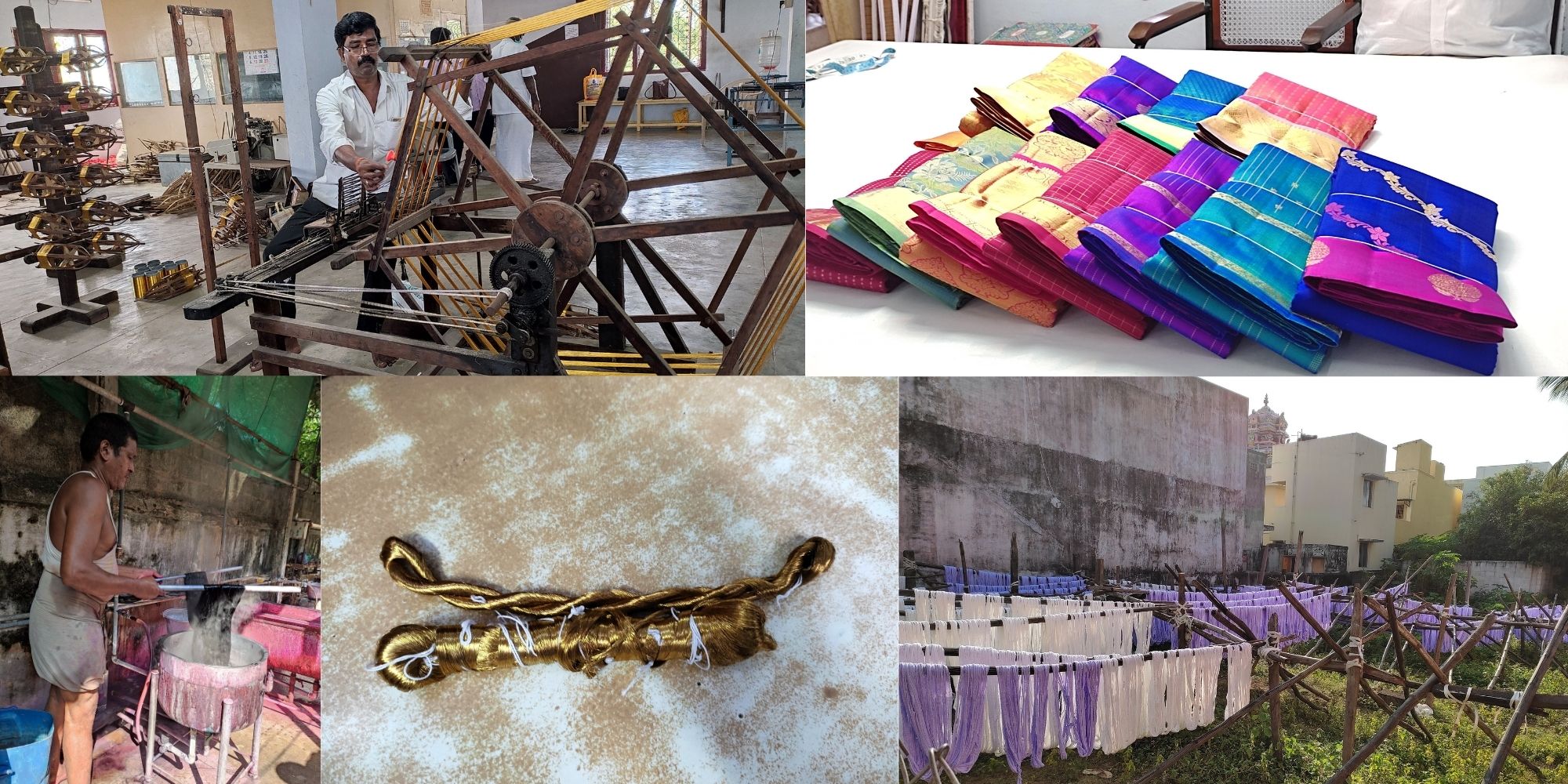 Kanchipuram (Tamil Nadu): No Indian girl can ever say no to the magic of the sari. Whenever wedding bells ring in Tamil Nadu, women are seen wearing beautiful silk saris with intricate zari patterns and bright colour combinations, sari hand-loomed from the purest form of silk. A hand-woven silk sari is an heirloom that passes through the women of the family and it is a prestigious occasion for every Indian girl when she is standing there wearing her mother’s or grandmother’s handloom silk sari.

“It takes 15 days to one month for us to complete a hand-loomed silk sari. We take orders for weddings three to four months in advance so that we can provide the customer with the perfect sari for the special day,” said S Moorthy, a 75-year-old handloom weaver.

The zari of the Kanchipuram saris is made with pure silver mixed with copper and gold covering that are imported from Surat. Raw silk is that 100% Kora is cleaned to remove the dirt and other impurities that lead to a loss of about 28% of the silk. This is what makes the Kanchipuram saris the purest form of silk saris in the country.

“Nowadays some private organizations use fake silk thread. The buyer will not know the difference,” said Bharat, member of the Kanchipuram Kamakshi Amman silk handloom weaver’s co-operation. “While remaking pure silk saris, we process them by putting them under heat. If the sari is made of pure silk, after the thread is burnt the copper wires will stand out, but in case of duplicate silk saris only ash will remain,” he added.

The cleaned silk threads are then taken for dyeing. This process takes one week to three weeks to complete when the threads are washed, boiled in dyed water, soaked in acetic acid, and then dried under the sun. Lakshimipathy, a dexter (person who is involved in the process of dyeing clothes) said: “We have no source of income during monsoon seasons as the rains are unpredictable. So, we remain unemployed during this monsoon season because of which even the weavers are out of jobs. This is tricky because we will have the wedding season right after the monsoon season.”

The dyes that are used for dyeing are almost natural. The effluents that are released after dyeing are used to mix with the sewage directly but now, they have a wastewater processing system in which the effluents are processed and reused a few times before being released as waste. Kanchipuram weavers are now taking steps to protect the environment while being in touch with traditional weaving techniques.

After dyeing, the thread is taken back to the handloom weavers who usually have their handlooms at home. The weaving for one sari takes about a week, and two people are engaged in it. The prints are first made on cardboard and then transferred to an achu attai, a cardboard paper with holes for designs through which the silk thread can pass and bring out the design. “We are now taking up customised sari orders for weddings and other events. Even though we use computer graphics to make our designs, the way we work our handlooms will always remain traditional and pure,” said Narayanan, handloom weaver. 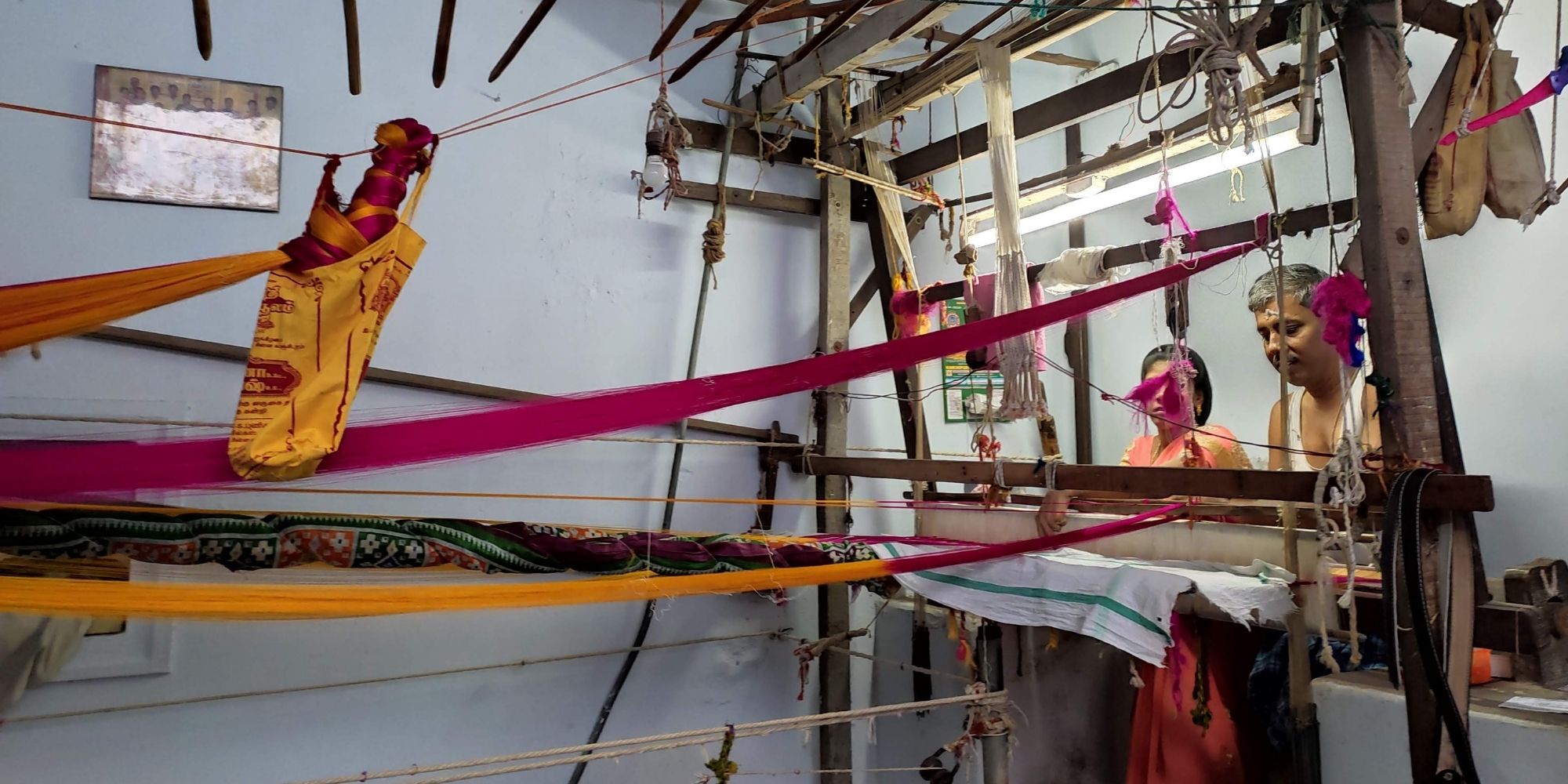 The future
Handloom weaving in Kanchipuram is a unique and special art form. Each sari is loomed with care and attention and it takes more than 15 days to weave the perfect silk sari. Weaving a sari on a loom involves more labour and time. A family of five should work to produce a sari on a handloom. That is what makes Kanchipuram’s hand-loomed saris so special.

“Handloom weaving is more of a legacy. My grandfather was a weaver, my father was a weaver, and I am now a weaver. However, my son is now receiving a quality education; he wants to become a doctor, and I will not stand in his way,” said Kannivel, handloom weaver. “I will not let my daughter exert herself on the loom and I do not want her to struggle as I did,” said Kamalnadhan, another weaver. Similar to farmers, most handloom weavers do not want their children to have a laborious life as they had and are providing the next generation with quality education.

“In the next 20 years, there will be no handloom weaving, power looms will take over the silk textile industry,” added Kamalanadhan.