According to them, a large section of society believes that pendency in courts is the result of a shortage of judges in court. It is not just about the number of judges but also the amount of work burdened on them. 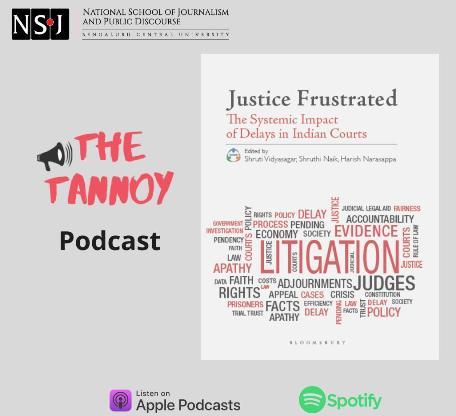 In this episode of the NSoJ Tannoy Podcast, we speak with Shruti Vidyasagar and Shruthi Naik of Daksh who are also the editors of the book - Justice Frustrated: The Systemic Impact of Delays in Indian Courts. They talk about the impact of court delays on vulnerable sections of the society and the effect of increasing the number of judges in reducing pendency in Indian courts through data analysis.

Daksh is a civil society organisation that undertakes research and activities to advocate accountability and better governance in India. Based in Bengaluru, they measure judicial performance and create mechanisms to encourage accountability from the government. The book is a volume of essays contributed by lawyers, economists, sociologists, and researchers who try to understand the reasons behind a delay, its impact and how it can be anticipated.

They encountered a number of anecdotal stories on how cases were conducted in courts and realized that there is a need for more “granular data,” to justify judicial delays. They wanted to go beyond numbers and gain better visibility into people, processes, and cases to understand the reason behind the systemic delay in India’s courtrooms.

The first chapter of the book by Justice Jayasankaran Nambiar looks at the legal system not only as a mechanism to settle disputes but also one that is adequate and effective. Ms. Naik says that it is difficult to notice a trend in inefficiency and inadequacy as many factors contribute to an ineffective hearing. Another roadblock is the lack of a scientific method in scheduling cases. Ms. Vidyasagar says that a lot of courts try to schedule over a 100 cases everyday and it is impossible for a judge to allocate time to hear these many cases each day.

This project is an experiment to answer if appointing more judges solves the problem of delay and rising pendency.

Recently, Daksh collaborated with the Delhi High Court to check how new courts perform without the pressure of backlog cases. They used a court log app which records the amount of time taken to hear each case. During this study, they found that it only took 24 hours to dispose off a murder case. In some cases it could even take three decades.

According to them, a large section of society believes that pendency in courts is the result of a shortage of judges in court. It is not just about the number of judges but also the amount of work burdened on them. Surya Prakash B.S. and Siddharth Mandrekar Rao investigate the claim that increasing the number of judges will reduce pendency in Indian courts. Their analysis compares the performance of courts in two districts of Karnataka.

That proves that burdening new judges with pending cases results in inefficiency. “Just imagine that you joined a new role and you have 2000 projects that are pending on your desk. It is extremely scary to imagine that, that is the workload you start off with,” said Ms. Naik.

Impact of delays on vulnerable sections of society

“For children who are born when there is a woman who is under trial in prison, there is a rule that beyond the age of 6, the child can no longer live with the woman. The amount of trauma and stress that a child has to face during the developmental stage is worrying and it is something we tend to miss out when we talk about judicial delays,” says Ms. Naik while speaking about the impact of court delays on families, especially women and children.

The book also sheds light on the psychological toll of court delays and how they change one’s lifestyle and mindset. “They are essentially left and forgotten,” she adds while referring to the poor and those who are unable to exercise agency.

Impact of delays on the government

The government is the largest litigant in the country and court delays are expected to be influenced by the pace of litigation of cases that include it. Ajay Gupta's chapter talks about the software Legal Information Management & Briefing System (LIMBS) which is used by the Central Government to monitor and keep track of its litigation and move forward to improve the progress of its cases.

Malini Mallikarjun also explores how court delays result in officers in the education department spending most of their time in fighting the litigation rather than devoting attention to ensuring positive educational outcomes.

Can Artificial Intelligence (AI) solve the problem of pendency?

“AI is the buzzword these days and everyone wants to work with AI to understand the problems with the judiciary,” says Ms. Naik. According to her, it is going to take time to see solutions from it as each judge has a mind of his own and is going to write judgements and orders in his language. In this case, it will be difficult to train machines.

“The idea is to look at the entire judicial system as one,” says Ms. Naik. They have come up with a series of papers on their Justice Platform that defines an ideal justice system. By collaborating with the judiciary, they have helped a number of courts and tribunals to understand problems and reasons for delay in their jurisdiction. “There is a need for an overhaul in the entire justice system,” she adds.