Bengaluru FC’s win over Jamshedpur proves the team might be well on their way to salvaging this season. 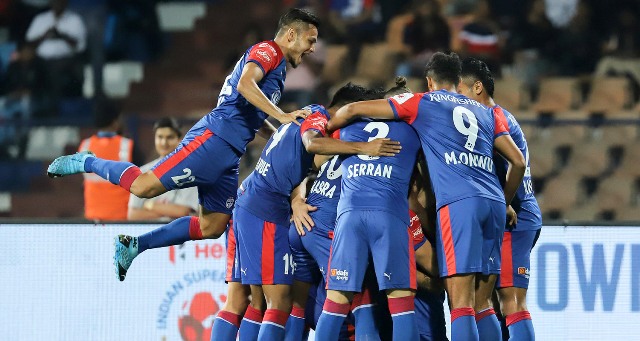 Bengaluru: Bengaluru FC defeated Jamshedpur in a 2-0 victory at Sree Kanteerava Stadium, on Thursday, January 9. Although the team kicked off the season with mediocre performances, glimpses of their former selves were seen throughout the match. Riding on the momentum from their 2-1 victory over FC Goa last week, the boys in blue dominated the game, scoring a goal each in both halves.

Erik Paartalu’s header off of Dimas Delgado’s corner gave Bengaluru the early lead in the eighth minute. Having established himself as the star on the midfield, Paartalu was highly instrumental during the second half, controlling the tempo of the game.

With better ball possession and attacking approach, Bengaluru pushed harder than they did earlier this season. Captain Sunil Chettri’s wizardry in the second half proved  that the defending champions are back on track to becoming strong contenders.

Bengaluru FC’s loyal fan base, the West Block Blues, known as the league’s most vocal fans, stood behind their team, chanting and singing.

“After Udanta came in we had a better chance, he exploited the right flank brilliantly. Chettri being Chettri scored as always. Overall it was a  good win,” said Sai, a BFC fan.

Jamshedpur, who looked forward to bouncing back from a two-game slump, stood no chance against BFC’s defense. Gaurav Mukhi’s return to the league after  his six-month suspension was not enough to keep up with the highly motivated Bengaluru squad.

Adding to their misery, key players Piti and Sergio Castel, did not make an appearance during the match. David Grande’s scoring attempt in the final quarter did not faze goalkeeper Gurpreet Singh, who effortlessly tipped it over.