While discussing work in the social impact space, he talks about why solving social problems is comparatively tougher than business problems, and how leadership training, and capacity building programs make a difference in organizations. 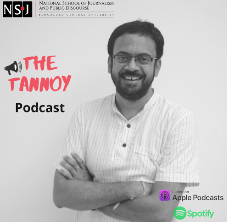 In this episode of the NSoJ Tannoy Podcast, we speak with the co-founder of The Amani Institute, Roshan Paul about how he built a career by connecting with people to solve some of the world’s toughest problems and what led him to the line of social impact work.

Mr. Paul believes that it is important to have a global mindset. There were a number of programs and schools like Amani in the West and hence they aimed at flourishing in Nairobi, Kenya. “We decided that we always wanted to be with an emerging market focus working from the global south,” he said. There were strategic reasons for choosing Africa as the place to get started. It is an english speaking country and the only UN Global headquarters outside of the West, therefore opening doors for immense innovation in social entrepreneurship. That’s why he moved to Nairobi to get started.

“I was graduating at a time when the United States of America was planning to bomb Afghanistan and Iraq,” he said. Having graduated during troubled times, he was interviewed at consulting firms and investment banks. “It just didn't make sense to spend my life doing something else when there were real problems to be solved,” he said while talking about how he decided to quit a high profile job in America and transition to social entrepreneurship.

All about making a difference

He realized that there was a gap between the way people are being trained and what employers look for. “We needed a different model to train people to have meaningful careers in the social impact space,” he said. According to him, it was not just about making money but also about making a difference.

Initially, they were not backed by funding or institutional backing. “All we really had was ourselves and what we were willing to put on the line,” he said while explaining the great sacrifices he and his team had to make. They were not ready to ask anyone to do something that they were not willing to do and this is what resonated with their students.

Social problems continue to stick around. “If they were easy to solve, we would have solved them,” he said. In the business world, he said that all problems cannot be solved with money and it takes a different type of skill set and understanding of the world to approach real world problems.

Having trained more than 500 global citizens, they have confronted many social problems. They were looking at the problem of young people living in the slums of Nairobi. The focus was to realize what Nairobi’s youth could bring to the table. He said that they had immense knowledge about the city and knew how to survive in it. Hence, they created a tourism initiative where you could get a city tour by the youth from the slum. “It grew up to be the number one Airbnb experience,” he said.

They also did internal capacity building for organizations because business models are constantly evolving and employers want to build a team that can work efficiently in this dynamic environment. “We also work on leadership training, storytelling, and communication skills,” he added while talking about how Amani has made a mark in almost every continent.

“My co-founder and I are going to shift from day-to-day management to being on the board of directors,” he said while talking about his big announcement. They are hiring a new Chief Executive Officer (CEO) and he is very excited to see who will take this up. “We are looking for someone who is a global thinker who wants to make an impact. We are also looking for someone who has an entrepreneurial mindset with a passion to solve problems,” he added.

How do you let go?

“It has not been easy. But at the same time, I also know that there may be others with different skills and ideas that can lead this organization in a different way,” he said.

“There is no immediate plan,” he said. He is also writing a book that records the journey of Amani since the last 10 years. “We will publish that book and let us see where that goes,”he added.