The Science Of Art 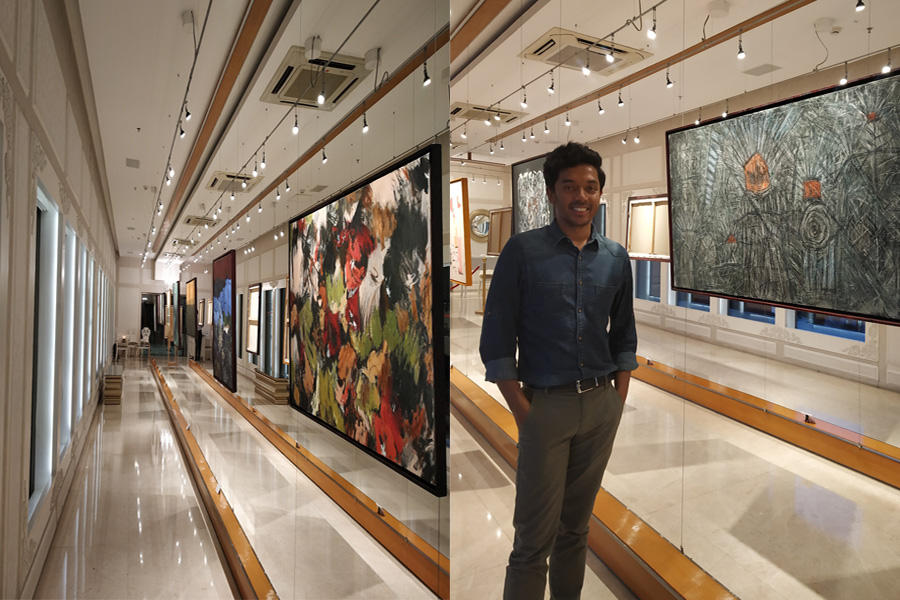 Scientist and artist Thayada Shamsudheen’s fascination with art started at age 16, when he saw a friend paint for the first time. “It moved me in a very interesting way,” he says.

A lot has changed since then; Shamsudheen, now aged 33, works for ISRO and is in the middle of his third art showcase. For him, painting is a way to feel and express things, something that shows in each piece put up at the showcase. Each painting is connected to strong emotions or places that made an impression on the artist, and has a story of its own. The painting done at the Sabarmati Ashram, which is the principal piece of the exhibit, is one such example. The work is a reflection of the peace he felt as he sat in the stillness in Kasturba Gandhi’s room.

Shamsudheen is drawn to the genres of abstract and figurative art, “as an artist, you set certain boundaries for yourself, but even with these boundaries in place, there is still a sense of freedom. I can let my mind wander as much as I want.”

Staying true to his roots in science, he has a very methodical approach to his paintings, working on about four paintings simultaneously, which takes at least a month to complete. He also tries to read as much as he can to supplement his creativity, saying that he feels ‘dried up’ when he doesn’t read.

His face lights up when he talks about his family and the support he has gotten from them. Their feedback is very important to him, he says, describing them as an ‘objective pair of eyes’ that provide perspective. A painting that is closest to him is also the one that took the longest time to complete. An abstract of the Eddakkal Cave is closely related to fond memories of his childhood in Wayanad, Kerala and took nearly 2 years to complete.

Although he is quite new to the art scene in Bangalore-the exhibit at Sublime Galleria is only his third- he says he feels welcomed when interacting with his contemporaries. “The art community here is very warm and it is definitely growing interestingly.” He also values it for what it is, a community within which one can grow and learn, all while gaining new perspectives and taking their art in new directions.

Shamsudheen will also be a part of this year’s Art Bengaluru exhibit, a festival for arts that focuses on raising awareness and appreciation for paintings, sculptures, installations, photography, music, dance and other performing art forms. As for his future plans, he plans to take on sculpting and taking his artworks across the city of Bangalore and perhaps even nation-wide in the near future.