A personal journey behind the unknown world of live events. 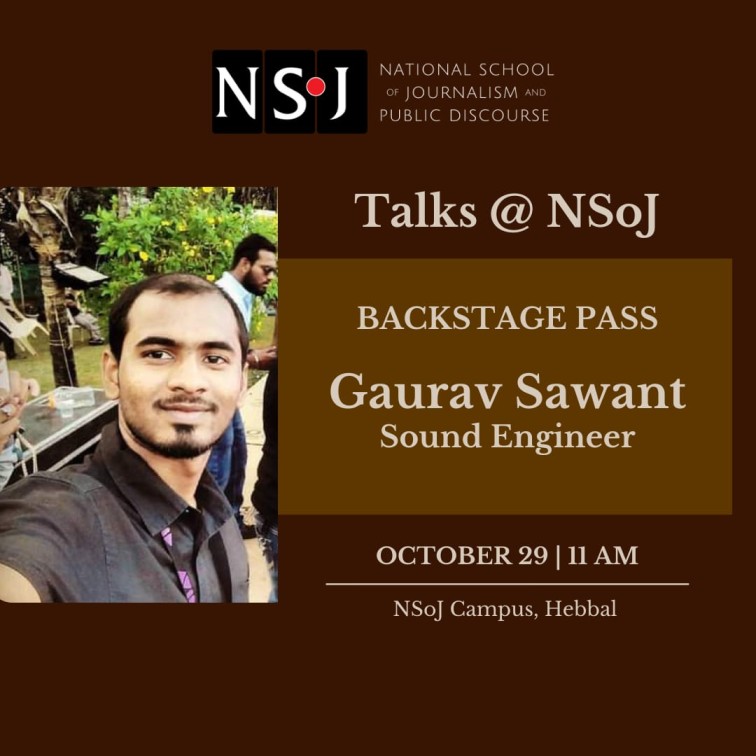 Have you ever thought about what goes on behind a lavish wedding set up, corporate or music event, or any event big or small, for that matter, that left you awestruck?

At an interactive session held at the NSoJ auditorium, Mr. Gaurav Sawant, a well-known name in the world of sound engineering spoke about the very different journey he undertook from others.

In his opening remarks, he shared that it was very rare that people from his profession got a chance to share their stories with an audience. He emphasized the fact that all the backstage work goes unnoticed but what keeps them motivated is the experience once the setup is completed and the smooth conduct of the event. The satisfaction and hidden surprises that come their way leave an imprint on their minds and hearts once the event comes to an end.

He said, “each day is different, each location is different with different outputs and every field has different demands”. Every event is a challenge in itself and completing that challenge with an aim of making the client happy is what matters. “At the end of the day, what counts is the satisfaction of the client”, he added.

When asked about some of the challenging projects he has worked on, he shared the experiences behind the launch of the Ford Mustang at the Jawaharlal Nehru Stadium, New Delhi back in 2016. The duration of this event was only 25 minutes but the amount of work the backstage crew had put up was 11 days worth of production before the launch.

“The best part of the event was the deep learning that we had as it was full of twists and turns and of course many secrets,” he added.

Another event was singer Ananya Birla’s first music launch, “Livin’ The Life”, which was 30 minutes long. An unsaid surprise was an after-party with Afrojack and Birla.

“We should all live for the challenges that we get to face every day. It's always the thrill of the unknown which keeps us going”, he concluded.