How has the bystander effect poisoned the Korean-Pop industry?

K-pop is gradually taking over the entertainment industry worldwide. It houses visually appealing music videos, riveting beats, and a dedicated fan base, but it has a dark side too. 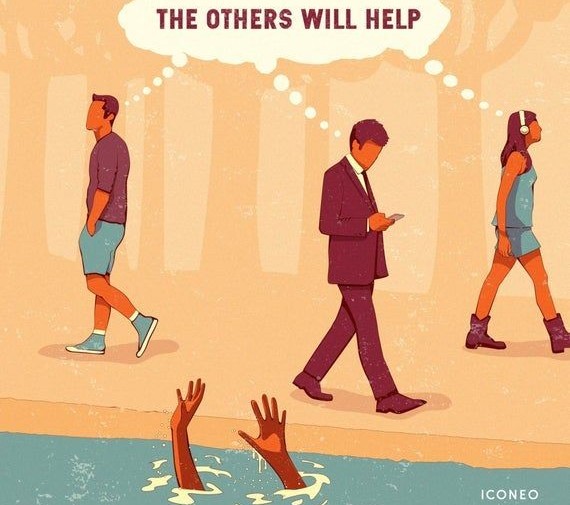 The bystander effect remains because instead of evaluating the situation, people evaluate each other. [Image: iconeo design, etsy]

Korean-pop, widely known as K-pop is a genre of music. It originated in South Korea. It is generally ‘popular music’ that incorporates experimental, jazz, rock, R&B, reggae, hip-hop, electronic dance, and traditional Korean music. The artistry and visual aesthetic have created a humongous fan base that is vocal on all social media platforms. “K-pop motivates and inspires me to be a better version of myself”, says Sejal Kaur, an ardent follower of K-pop.

“I ate almost nothing and starved. I was singing in a skinny body but couldn’t perform my best. I might have looked good but I was very depressed”, said Ailee, a Korean singer. Despite being one of the best vocalists, she faced repeated rejection from her agency for her body. Artists undergo extreme diets and training to fit into an “ideal type” that requires them to have a light complexion, slim figure; and a perfect facial structure. “The industry is so visually focused, it is like going through a checklist.”, said Amber Liu, a former member of the girl band, F(x). This has taken a toll on the mental health of many K-pop idols. Artists have witnessed fellow band members fall prey to body shaming and extreme dieting. “Artists are pressured to portray their perfect version. This is doing more bad than good for both the artists and fans.”, says Vineela Sindhu, a K-pop fan.

“I believe, there is a dark side that encompasses prostitution, assault, and corruption by entertainment agencies.”, added Vineela. Last year, the industry was hit by one of the worst scandals - the Burning Sun scandal including allegations of sexual assault, prostitution, drug distribution, hidden camera footage, tax evasion, and police corruption. The scandal involved a group of well-known K-pop idols who shared explicit content of women in a chatroom including K-pop idols- Seungri of BigBang and Jung Joon-young. A CCTV footage of a woman being drugged and dragged inside a bar surfaced online. It was observed that the onlookers did nothing. The scandal elicited mixed reactions from the fans. While some were brutally against it, some supported their K-pop idols.

“People are encouraging unrealistic beauty standards because it is doable. In the K-pop industry, if you are anything but the “ideal type”, you are not fit to be a K-pop idol. In this context, both entertainment agencies and fans are bystanders. Entertainment agencies go to any extent to provide content to the public. They are letting fans encourage this notion.”, says Udbhavi Balakrishna, a fan.

This has shed light on the power of situations to influence perceptions, decisions, and behavior of individuals. A theory popularized by Bibb Latané and John Darley continues to be analyzed due to the evolving nature of human behavior. According to them, a bystander finds it difficult to define a dangerous situation. They weigh the pros and cons and make a decision favorable to them. Their decision is clouded and they are less likely to help a victim in the presence of others. The underlying assumption is that the responsibility is shared among the people who are already present at the scene. “Part of the problem is that you don’t know if you should step in.”, says Stephanie Johnson, Professor at Leeds School of Business. The core of the phenomenon is the prevalent abuse of power and the system that prevails.

So what can be done to overcome the bystander effect and transition to a more actionable stage? Simply being aware of the phenomenon may not break the cycle. When faced with a situation that requires action, how do we inspire others to take cues? Whether it is on the street or online, individuals must feel that their actions will be effective. “I report bullying behavior online and post positive messages instead”, says Sejal.