Hidden Treasures of a Heritage Church 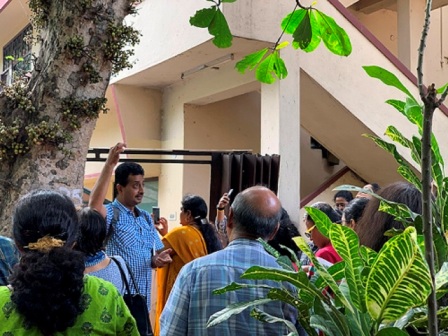 Nestled in the heart of Bangalore is the 150-year-old All Saint’s Church, a heritage structure that also has a variety of trees from around the world, in the church grounds. However, both the structure and the natural habitat is now under threat – from the ongoing construction of the Bangalore Metro Rail Corporation (BMRCL), Phase II.

One early Saturday morning, a group of 20-25 people gathered at the Church for a nature walk organised by the Indian National Trust for Art and Cultural Heritage (INTACH). The tour was meant to help the visitors understand the richness of the flora and fauna on the Church grounds, and also underscore the importance of the building itself.

The walk was led by T S Srinivasa, an engineer by profession and a ‘nature lover’ by passion. He spoke about the tree species in the church compound, with details including origin, scientific name, uses and also, a brief history of how these were brought to India. Nature enthusiasts from various walks of life including doctors, historians, retired army men, across different age groups were fascinated by the diversity found in this large garden. Presently, there are over 30 species of trees including commonly found ones such as jackfruit, gulmohar, tamarind, and palm. The rare species found here include camel’s foot tree, African sausage tree, tung oil tree, and the Indian almond tree.

Tung oil tree, originally from the Indonesian islands, has seeds from which oil is used as a finishing product in woodworking. The only other places it is found are Lalbagh and Cubbon Park, said Mr Srinivasa. He went on to explain that it is still not known how trees such as the African sausage took root in this city.

And did the participants find the walk interesting? “I have been to this church several times, but this walk was a special one as it helped me realise the importance of such green spaces in the center of the city,” said Ramesh Philip, one of the participants.

BOX: Protests On To Protect Heritage?

This heritage site has also been in news recently, because of the threat posed to it because of metro construction in the area. “We have a crisis. We [the church] had earlier given the BMRCL authorities 40,000 sq ft of land, but now they are threatening to take over the church premises also,” said long- standing member of the church, Ebenezer Prem Kumar. Mr Prem Kumar noted that the premises also houses a school for children with cognitive dysfunctions. There are around 60 students in regular attendance and the school is now is in danger of being demolished, he said.

Also, close to 150 trees are now under threat, if metro construction is to continue. As of now, deliberations are still ongoing between the concerned authorities and members of the church. In fact, 13 October marked the 144th day of protests against the construction. “Our main concern is that the construction will damage the structural integrity of the church. We do have a series of meetings with the authorities, so we hope that they will offer some degree of relaxation,” Mr Kumar added.