From Active Citizen to Active Reporter

Pravir Bagrodia delivers a talk on citizen journalism and its importance 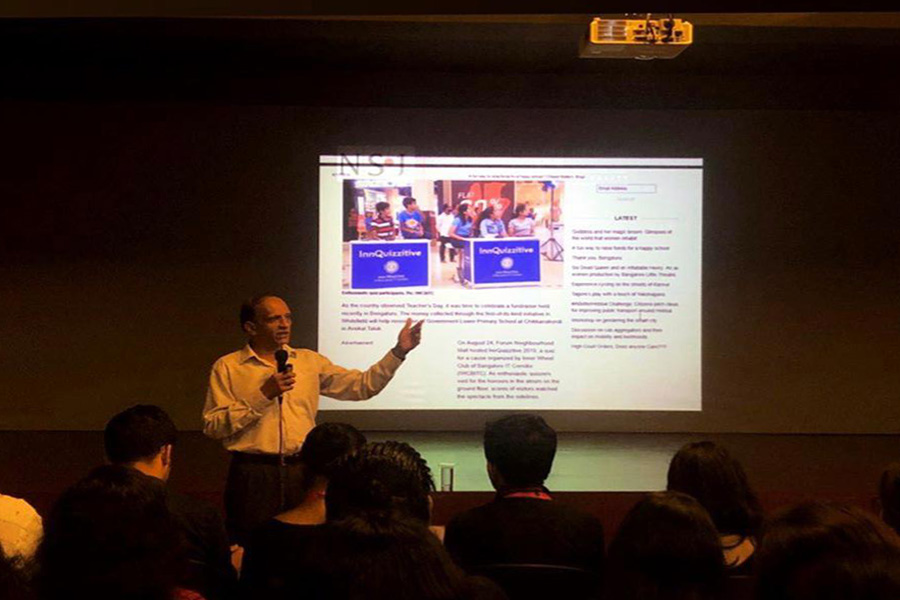 “A citizen reporter covers stories that the mainstream media does not cover,” said Pravir Bagrodia, Chief Copy Editor at ansrsource, Bengaluru, about Citizen Journalism on 20th September at the National School of Journalism.

While interacting with the students, Mr Bagrodia, who has worked at The Times of India and DNA, highlighted the differences between an active citizen and a citizen reporter. Drawing on his experience of volunteering with civic action groups such as Whitefield Rising, Mr Bagrodia explained that an active citizen is someone who takes active participation and organises event for a public cause whereas, a citizen reporter writes positively in order to bring change in society. He further talked about how, as a citizen reporter, visuals and caption play an important role. These convey the emotion better and give a personal touch. “Always have more visuals and a nice caption,” he stressed.

Unlike the professional reporter, citizen journalists get the liberty to not follow the traditional form of ‘Inverted pyramid’ style of reporting instead, they can create their own unique style. Citizen reportage is a mixture of both report writing and feature writing, he said. A citizen reporter even has the liberty to write more than the word limit which gives them an added advantage to write in- depth stories.

During the talk, Mr Bagrodia gave the students an insight into how citizen reporters do different stories and what to keep in mind while writing a story. From writing catchy sub-heads to understanding the power of quotes, he explained it all.

He urged the students to be wary of the amount of information they get today. “When you write as a citizen reporter and cover an event, the organisers tend to give only the positive side. It is up to you to filter it out, and create a balance while covering the story,” he added.