Disregard for SOPs even as cases go up

There has been a gradual rise in the number of COVID-19 cases in Karnataka owing to the people's negligence in following essential pandemic protocols. 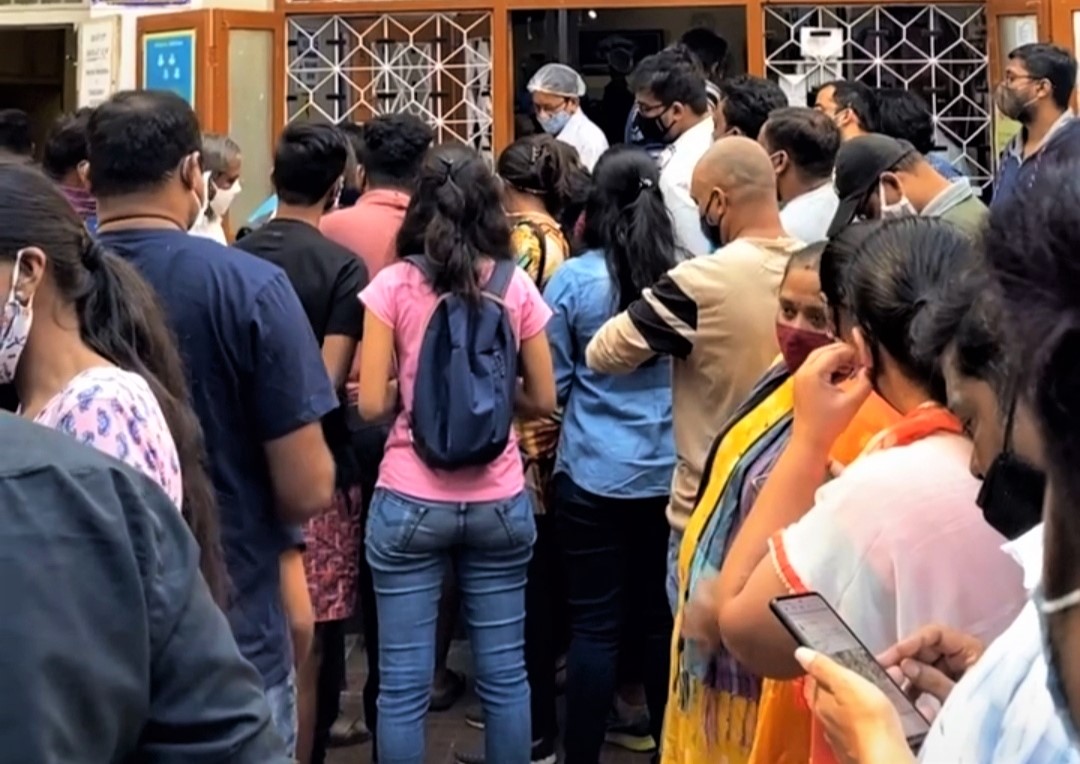 People crowding at one of the popular restaurants in Bengaluru.

Bengaluru: In the last few weeks, there has been a gradual increase in the number of COVID-19 cases in the State, especially in the city, which may be owing to a cocktail of social-distancing violations, the improper wearing of masks, a large number of interstate travellers, entry of new variants of the virus, and the negligence in following a few other protocols to curb the effect of the pandemic.

The rise in the cases has prompted the State government to increase the daily testing figures in Bengaluru, besides issuing guidelines to restrict the number of people in gatherings to 200 at marriages, 50 to 100 at birthday parties, funerals, and other ceremonies or functions. Since the first week of March, the State has been reporting over 1000 COVID- 19 cases in which the city has accounted for more than 50 percent of the caseload.

“We have been instructed to do temperature checks every day. We are not allowing students and faculty members with temperature higher than normal body temperature to enter the college premises. If the high body temperature persists for 15 minutes, we ask them to get their COVID-19 test done,” said, Mr Mrityunjaya, security guard, Atria Institute of Technology.

Mr Ravi Kumar, who shares the security shift with Mr Mrityunjaya, said: “We have several students coming from other States, but we allow them into the campus only if they provide us with a COVID-19 negative certificate. Students have become careless, so we keep instructing them to wear masks. If we come across any student with pandemic-related symptoms, we immediately inform the Principal of the college and then send him/her to the nearest hospital.”

Ms Kanchana, the owner of Laxmi Fabrics, Ganganagar, said: “In the last few months, not many people have shown interest in shopping. If the government imposes another lockdown owing to the second wave of the pandemic, our business will be severely hit as we are still recuperating with the losses from the earlier series of lockdowns.”

Asked about her views on the new Standard Operating Procedures (SOPs) released by the government, she said: “I don’t see people following any SOPs despite the probable second wave of COVID-19 pandemic. Last month during the farmer’s protest in Delhi and even in our State, thousands of people had gathered and no social distancing was followed. People were not even wearing masks. These are a few basic rules one has to follow during these uncertain times. People have been attending weddings and other functions in large numbers thinking that normalcy has returned.”

Mr Bhojraj, a senior citizen, said: “We are following social-distancing norms and wearing masks while walking in the streets, but only a few people following these protocols will not help. People should have some sense of responsibility. I have got vaccinated but many are still hesitant to go through it. I have seen a number of educated people at a few government hospitals in RT Nagar being careless, and it is unfortunate to see that this attitude of the people is what has led to the surge in the number of cases across the State.”

“We have marshals deployed on roads to check social-distancing and mask violations, but there are hardly a few of them employed at various metro stations in the city. There are no officials inside the train to check whether people are abiding by the protocols. People stand close to one another without maintaining a distance. A few of them do not wear masks. I am a witness to this scene every day at the Kempegowda metro station during peak hours (7 am to 9 am and 6 pm to 9 pm). Some action has to be taken by the government as early as possible to get things under control,” said a commuter.

As many people believe that following the SOP’s will prevent the rising number of cases in the city, there is a contrary opinion, too. A student said: “I feel that wearing a mask is of no help. People suffering from claustrophobia and bronchitis are facing respiratory issues. Wearing a mask is also damaging the skin underneath my mouth. We are fighting this pandemic neglecting other health problems. On social-distancing, I feel it is just a theoretical concept.”